The First Era of the AWRF Technical Committee 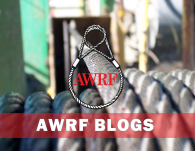 In July 1976, at Houston, Texas during the first summer meeting of the AWRF Board of Directors, President Emeritus Ken Kirby named three men to form a technical section of the board. His directive marked the start of what would evolve later into AWRF’s Technical Committee. The three men he named were Jim Yarbrough of Memphis TN, Robert Ashley of Atlanta GA and P J Cortez of Marero LA, all of whom had been present during the very first two previous formative sessions of the wire rope fabricators trade association. Those three men represented Yarbrough, Superior, and Lowery Brothers, three of the largest independent sling shops in the USA. One-third of a century after Kirby’s inaugural assignments, in February 2010 at Phoenix, Arizona, Charles Lucas of Tulsa OK arose during the regular winter meeting of the AWRF-TC to announce Awrf Technical Committe Historyhis retirement. Because Crosby had been the very first of many component manufacturers to support the independent fabricators at the beginning of the association, and because Crosby (despite ownership changes) had consistently continued that solid support in many varied ways over the years, mainly through Lucas’ volunteer services, his retirement perhaps could be said to mark the end of the first era of the AWRF-TC. In 2002, a survey of AWRF members’ attitudes showed the Technical Committee was ranked as the association’s most important single activity by member companies. Because many of the original key players are now deceased or retired, it is appropriate to summarize the achievements of this committee as a new era begins.

Without debate, the outstanding individual and guiding spirit of the AWRF-TC throughout most of its first era was Frank Becker of Fort Wayne, Indiana. He had been a Crosby employee prior to becoming a slingmaker, and had served the association as an officer and director during the formative years. His honesty, integrity, and reputation for fairness were known to all. Frank led the committee for 20 years, beginning in 1984 when he was asked him to take over as chairman during the Fall general meeting at Monterey, California, and continuing until he THE FIRST ERA OF THE AWRF TECHNICAL COMMITTEE stepped down at the Savannah, Georgia general meeting in the Spring of 2004.

PART I – 1976-1994
At the beginning, and during the first five years of its existence, the AWRF-TC was reactive rather than proactive. At the time of the AWRF Spring 1978 general meeting at Las Vegas there were more than a dozen wire rope manufacturers doing business in the United States, Canada and Mexico. Many of them operated their own nationwide network of sling shops. For many years, the U.S.A. wire rope companies had been organized into business leagues. As of 1978, three such leagues (each for a specific purpose) were based in the Washington DC area. The oldest group was the Wire Rope Technical Board. It was originally the technical committee of an earlier pre-WWII wire rope trade association that had been dissolved by action of the Federal Government.

READ MORE about The First Era of the AWRF Technical Committee in SlingMaker Issue # 125 on Page 8.